Oh, man. I had been waiting for this one.

Literally checking everyday until I could submit an ARC request. And, when the book arrived from the publisher, I could have squealed. 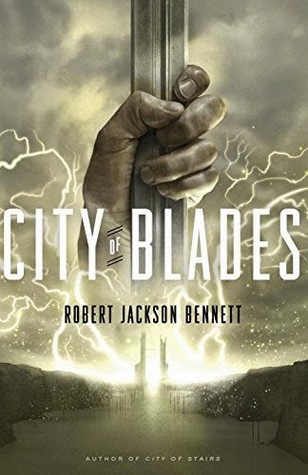 City of Stairs was a 2014 release that I really enjoyed. It revolves around a character, Shara, who is sent to a country where the gods aren’t just gone, they’ve been killed. It’s a fantastic fantasy meets spy novel. The follow-up to City of Blades was released yesterday (Spoiler: Get a copy. You’ll love it.).

City of Blades follows General Mulaghesh. She was a city governor in the first book and played a big role in Shara’s story in Bolikov. In the newest installment, Mulaghesh has retired, very vocally, and has hidden herself away to drink herself to death. But, Shara, who now has increased power and the same tenacity, has called Mulaghesh back into action. After the Battle of Bolikov, Mulaghesh thought she would be done with politics and the old gods, but she has a sinking feeling when she finds out where Shara is sending her: Voortyashtan. Voortyashtan is the city of Voortya, goddess of death and war.

When I had heard there’d be a follow-up, I didn’t pin it for a story about Mulaghesh, but I’m so glad it was.

Mulaghesh is a surly general in her mid 60s-ish. She’s surly, prone to finding herself at the bottom of a bottle, and extremely committed to her soldiers. She’s tough to say the least, but she’s a bit of a mystery in the first book. How she became who she is doesn’t get talked about. The newest story goes in-depth into Mulaghesh’s past, and the story is dark.

City of Blades also shows Mulaghesh in the aftermath of the Battle of Bolikov. Five years later, and she still is struggling with what happened. This, of course, is made worse by reminders of who she once was. In Voortyashtan, Mulaghesh is forced into close quarters with the man who led her as a young soldier and who is a constant reminder of darkness that follows her.

This sounds dramatic, like something that could be out of a melodrama, but the relationships and character backgrounds that Bennett draws are nuanced and complex with a depth that makes them seem very real.

Sigrud also appears. He’s a burly Viking-like man from the first book. His character, too, gets a deeper examination and is forced to face his past deeds, though in a different way than Mulaghesh.

Sigrud’s daughter, Signe, plays a large role. She’s a fantastically intelligent, full of ambition, and surprisingly complex. She’s a captain of industry determined to bring her country and those around her into a modern age.

The setting is equally dark. Voortyashtan is a grim place. The city was flooded and remains covered by the sea. The military outpost there is an old, dank fortress. There are secret hideaways and conflict between the locals and the Saypuri military present.

The plot is fantastic. It engages with the same mystery and fantasy elements as the first does, but is complimented this time by an even deeper look into the characters and the history of the world. There are battles and magic and mysticism, including the slip-away, broken bits of divine worlds that were present in Bolikov.

My favorite part of the story is the way Bennett approaches war, death, and one’s conscious. Mulaghesh is forced to examine her own past with the topics and, in the land of Voortya (Empress of Graves, Maiden of Steel, Queen of Grief, She Who Clove the Earth in Twain), must face the truth about herself and the soldiers who once followed the goddess.

Read it. Like it. Love it. I really believe this is going to be one of the best books released in 2016.

A huge thanks to the publisher who sent me a copy for free in exchange for an honest review.