Wizzywig is a fictionalization of the real-life story of Kevin Mitnick, a famous hacker arrested in 1999. It roughly outlines Kevin’s life, under the changed name of Kevin Phenicle. It’s split between narrators and timelines, including first-person, remembrances, and newscasts. It begins when Phenicle is in his early teens and follows through his release from prison and post-release work.

I wanted to like this story, but it felt very inconsistent. It didn’t have a stable and unifying point of view or a baseline really to be a touch point. This was my biggest problem with the story, and it caused a number of other problems. For instance, the narrator was often unclear. The switch in voice wouldn’t be clearly marked or easily noted. The plot sometimes felt meander-y.

I also often didn’t feel like Phenicle was a character that could be empathized with. It wasn’t always clear what was really motivating him or why he was taking certain steps. Similarly, I didn’t think that Piskor was clear on the extent of the damage that was being done to the people Phenicle was close to.

The most interesting part (remember that I’m a sucker for editorialization) was the commentary thread throughout about the nature of technological development and the attacking of those who want to explore and push the boundaries of it.

The art wasn’t my favorite. It’s simplistic and not overly imposing. Overall, I liked it well enough, but didn’t think it was fantastic.

I thought the book overall is a 3 out of 5. Mostly just sufficient for what it was, but not outstanding.

I received a copy of Wizzywig for free in exchange for an honest review for netgalley.

East of West is a feature I’ve struggled to pick up. It’s initial pages didn’t grab me and I put it down for a while.  When I was finishing it this week, it grew on me, but I keep thinking about how long it took for me to get into the story.

East of West is an apocalypse story pitting Death against War, Conquest, and Famine. Death has been injured; the exact nature of the injury is unknown.  He’s seeking revenge against the other three and trying to restore his life to what it once was. Death’s family, and the world, hangs in the balance.

The story features some interesting art. It relies heavily on shading and creates some serious depth in the characters. This can be very appealing, but also very abrasive. It blends a more traditional comic book style with some more Manga proportions and stylistic elements.

Fun moment! There are some characters that are ink-black and look a bit like Drow. 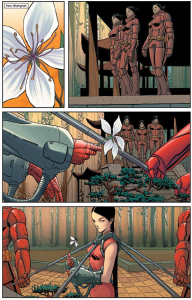 The story itself takes a long time to come together. I think this really contributed to my reluctance to continue with it. I’ll be honest, if I were trying this out as single issues, I probably wouldn’t have continued on with it.

Once the story comes together a bit, we see there is a great deal of complicated internal politics within the world and interesting plays on revenge stories. What’s interesting is the ways in which it is a bit similar to Pretty Deadly in subject matter. The stories themselves are different, but share a number of elements. I would say, as well, that East of West has a better sense of long-game plot building.

The characters are already interesting. Whether they’ll continue to be explored fully remains to be seen, but I’m hopeful.

I received a copy of East of West for free in exchange for an honest review via Netgalley.

Mind the Gap, volume 1,  follows Elle after she is attacked and in a coma. Her attacker is still on the loose, and coming to kill her. She has to find a way to communicate with the living before her attacker succeeds.

I received a copy of Mind the Gap for free in exchange for an honest review.

Spotlight on Graphic Novels: The Fuse

You can get a copy of The Fuse here.

Deitrich is a German police officer who requests a transfer to the Fuse, a space station with its own vastly different culture and circumstances. There, he’s assigned to homicide and “the Russia shift.” He’s not on the Fuse for a full day when cabelers (an isolated homeless population who lives in the maintenance areas in the walls of the Fuse) show up shot to death. Because guns are highly restricted on the station, the murders peak Deitrich’s interest. He and his abrasive partner, Klem, are about to uncover a horrible secret.

The story is interesting. It’s fast-paced and interesting. The plot itself is a little rough at times. There’s a lot of convenient plot points that are a bit too easy to come by.

The dialogue is a bit stinted at times. Dietrich never uses contractions which was off-putting. I think this is supposed to make him feel like a non-native English speaker, but it was more awkward than beneficial to his character. His actions make him feel far more real than his dialogue does.

The overall story has a lot of interesting subtext. The Cabelers are a great point with a lot of potential for development. We’ve been told that there’s a lot of complex ideas and reasons that the Cabelers exist and their interactions with the mainstream citizens is going to be great when more fully explored. I’m quite excited for it.

Klem is going to be a very interesting person to see develop. She’s cold and a bit sterile, but we know there’s more to her. The relationship we see with her and her son, as well as the way she approaches Dietrich hint at some very complex relationships.

I received this comic as an e-ARC from Netgalley for free in exchange for an honest review.

Boxers & Saints is a duology that I’ve been wanting to get my hands on for a while now. It was surprising to me, then, when (1) my library had a copy, and (2) those copies were checked in at the same time. I didn’t even have to think twice. I snagged them off the shelf and checked them out. At the time, I was reading 1Q84 by Haruki Murakami and needed a bit of a relaxing read.

Boxers & Saints tell two different stories about the Boxer Rebellion in China. One follows a Boxer, a rebel leader fighting against the forceful Christian sects that had arrived and been spreading into inland and rural China. The other follows a girl who converts to Christianity at the time. The Boxer Rebellion was a very bloody and violent time in both Chinese and Catholic history. You can read more about it here.

-Yang works hard to show the way that religious doctrines clashed in the formation of the rebel group, the Righteous and Harmonious Fist, and how other existing religious/political factions paved the way for its development. On the down side, the story focuses far less on the group’s history than on the emotional responses that led to rural villagers joining the movement.
-Yang depicts the rigid way that missionaries at the time approached proselytization and how culture clashes fed into conditions for violence. He also shows how the Christian missionaries were used as resources and provided social goods for members of the community. Though Boxers largely depicts the more harsh aspects of the missionaries in China at the time, it also makes sure to humanize the individual who were part of the church, if only briefly. This makes the violence resonate.
-The story focuses on a young man who helps to form and lead the Righteous and Harmonious Fist. Yang makes a point of using this character as a means to show the sometimes self-interested developments in the movement.

-Yang talks alot about how the people came to believe themselves to be empowered by supranatural beings and entities, taking on the powers and personalities of existing Gods. This was interesting, but a bit unapproachable at times to someone not in the know. In Saints, Joan of Arc was invoked. That was a bit more approachable and poignant for me. I especially liked how the community leaders jumped on the idea of a young Chinese girl seeing and having a connection with Joan.
-I wish there had been more history involved. The history was in the story, but at times without context.
-The art was simple, but was able to convey nuance and humor.

Overall, there often wasn’t enough historical context for my taste. It made some of the story harder to follow than it needed to be. I gave the pair a 3.5. I liked the second installation, Saints, more. It had some interesting portrayals of the Church’s missionary work in China and was a bit more approachable.

Manifest Destiny (available on ComiXology) follows the adventures of Lewis and Clark as they traverse the unknown western regions of North America. Unlike the journey we’re told they took, this highly fictionalized version features buffalo-men, zombies, and, of course, Sacagawea. This was a fun read, though not always a smooth story.

The story starts off with an exploration of land on the west side of the Mississippi. The crew has been sent with the limited knowledge that monsters may lie west of the river. They’re past the point of help or turning back.

They are attacked by buffalo headed, human torso-ed creatures.

Then, in an attempt to escape, they’re chased into an abandoned outpost. Things there, however, are anything but safe.

The novel features some great art and creative monsters.

The men are consistently led astray be Lewis and Clark. Clark is convinced that he is strong and brave enough to take on the unknown, and his pride won’t let him return to safety. Lewis is compulsive about seeking knowledge of the new life forms. Though Lewis is afraid, he wants to further the biological sciences.

The characters were interesting. However, the plot seemed to jump around without much regard for how it was foreshadowed or how the events were building.

On the plus side, there’s a fun Little Shop of Horrors feel to the first volume that I thought was very well done.

Admittedly, I read the first 97 pages and then let it sit for two weeks. That doesn’t speak much to the story being particularly engaging. It often seemed to alternate between random plot points and subplots that dragged. Overall, I’d rate it a three. There’s a lot of room to build, but also a lot of promise.

Coffin Hill* follows a young woman, Eve Coffin, who has returned to her home town after she leaving the Boston Police Department. She’s caught serial killers and had a successful career. Though she’s not excited to be going home, a town where children sing-song at her and call her the “Witch of Coffin Hill,” she has bigger things to focus on.

Eve’s walked into the horrors of her past: teenagers have started going missing in the Forrest of Coffin Hill. Eve’s worst fears, that the teenagers are being consumed by an evil she’s unleashed, are about to be realized and she’s in for a battle.

I expect that there will be lots of moments for growth as this series continues. It could use some more pauses and more explanation of how the past and present are interwoven.

Overall, a 4 out of 5 and a seriously optimistic eye towards the future.

Coffin Hill Vol 1 will be available May 20th. You can preorder it here.

*Review material for Coffin Hill Vol 1 was received via NetGalley