So, I have a bit of a love affair with kickstarter. The platform is fantastic for independent projects and unique works that may otherwise not get produced. BUT, it can be a slog to sort through what’s out there to try and get what you like. So, here’s the deal: I like books; you like books; I saw these and thought of you (and also how cool it would be if they were funded). 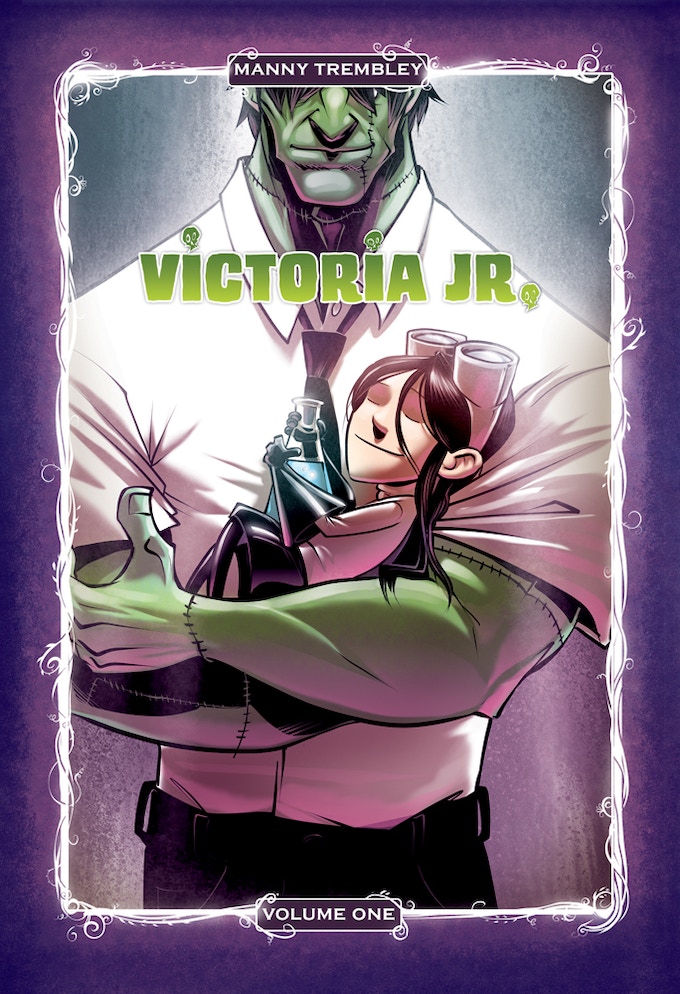 What’s this project about?

Victoria is a human girl adopted in to a loving family of monsters. Victoria Jr. was named by The Monster, after his creator, Victor Frankenstein. She lives in a world of fantastic monsters and creatures.

One day on her way to school, Victoria Jr. decides to capture the mythic “Spark of the Sun”. This is the same spark that the Greek Titan Prometheus stole to give fire to man. She thought maybe the Spark of the Sun could warm the undead hearts of her father, mother, and her younger brother.

Are you really asking me why a story about a little human girl living with monsters and trying to warm their hearts is adorable? Or why you should be all about a family-friendly comic?

Aside from the fact that the story sounds awesome, Victoria Jr. pays homage to the kind of stories that are fundamental to science fiction and fantasy. It’s sure to check boxes for SFF lovers and be a book to introduce children into the SFF world in a relatable, unintimidating way.

As a literacy tutor for ESL students, my favorite thing to give the kids I worked with was comics. They’re dynamic and visual, perfect for short attention spans. AND the embedded text makes the story feel like it isn’t work while still encouraging confidence in reading and significant vocabulary growth.

Who is behind it?

Manny Trembley is an indie comics artist with his own self-publishing line of comics. He’s run 6 successful kickstarter campaigns. This will be his second Victoria Jr. book.

What do I get at the lowest award level?

Bring Dinosaurs Back to Life by Zoobooks

Zoobooks are educational kids’ books about animals and ecology. Unfortunately, the last round of dinosaur books is pretty old. This project is going to update the books with new science and create a set of integrated apps.

Dinosaurs. Science. Zoobooks, what’s not to like? Zoobooks were a pretty big part of kiddom in the 90s and 00s. They’ve helped tons of kids learn about science using visuals and intriguing animal subject. They’re committed to keeping their books scientifically accurate, and are fairly accessible through most library systems.

Zoobooks, a 35 year old company with tons of books to their name and support from Wildlife Education, LTD.

$10 gets you the app and a series of exclusive updates.

We believe in science fiction’s transformative powers, its ability to remedy the dreariness of our lives. People of Colo(u)r Destroy Science Fiction! will exist, with your kind help, of course, to relieve a brokenness we’ve enabled time and time again by favoring certain voices and portrayals of particular characters. We won’t harangue you with guilt trips involving the importance of openly listening to the assimilated, the colonized, the misappropriated. That’s just not how we roll. What we aim to do, instead, is to challenge you: Join us because it is fun to do so. We don’t mean fun as a vehicle for trivializing centuries of injustice that resulted in the lack of representation for certain groups of people because power structures were skewed heavily in favor of a chosen few. We mean fun as the satisfaction we get in those light-bulb-in-the-head moments of our lives, the satisfaction we get from meaningful conversations that lend clarity, the satisfaction we get when we move past those feel-good-driven acts of tokenism, the satisfaction we get when we read stories that have palpable artistic and intellectual values that speak of our present time and most of all, our future.

The POC Destroy project is about raising the voices of marginalized groups in SFF. It includes a series of fiction and nonfiction writings written and edited by people of color. It includes art, flash fiction, novellas, and author spotlights.

The POC Destroy issue is set with a fantastic cast both of authors and editors including Nalo Hopkinson and Nisi Shawl. It’s also open to new voices in SFF. Basically, you need it.

Every extra dollar goes towards stretch goals that increase content.

PLUS it’s a project Lightspeed is committed to. They promised to publish the edition regardless of if they reached their funding goal. That’s pretty damn cool in my book.

In the film, we’ll accompany Le Guin on an intimate journey of self-discovery as she comes into her own as a major feminist author, inspiring generations of women and other marginalized writers along the way. To tell this story, the film reaches into the past as well as the future – to a childhood steeped in the myths and stories of disappeared Native peoples Le Guin absorbed as the daughter of prominent California anthropologist Alfred Kroeber and author Theodora Kroeber.

Ursula K Le Guin is a queen of science fiction. She changed the game radically. This project is largely already filmed, but needs a post-production budget. Part of the funding is contingent on non-NEH funding, so here we are.

As a total bonus note, all the levels are named after characters from her stories.

Arwyn Curry and her team have made a number of documentaries and written a number of articles for organizations like PBS, HBO, the New York Times, and Rolling Stone.

$10 gets you shout outs and updates

Edgar Allan Poe invites all his buddies and loves to dinner. It includes  Hemmingway, H.G. Wells, Annabelle Lee. It’s a video series that will be hosted vlog style with some livestreaming options, over a series of ten videos.

This form of storytelling has really been catching on. The format lends itself to interactive audience participation, visible and marked character growth, and innovation in film and story adaptation.

Cast includes Mary Kate Wiles who you may recognize from the Lizzie Bennett Diaries where she played Lydia.

Shipwrecked Comedy has run a number of past projects that have been done in a similar vein.

$5 reward is a digital invitation and livestream shoutout